The Incredible Casuals- "Live, Loud, Drunk, and Out Of Tune" (remastered) 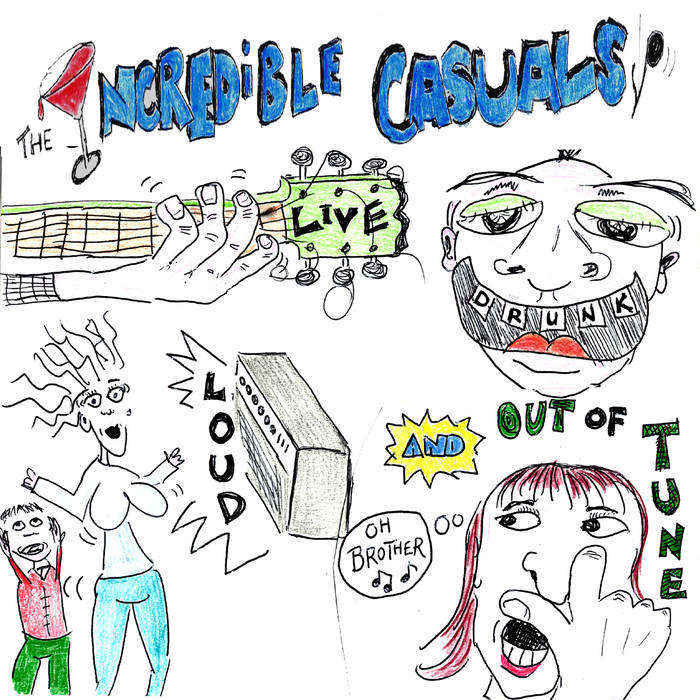 "Live, Loud, Drunk, & Out of Tune", the legendary 1992 full-length cassette by the Incredible Casuals, has been re-mastered and released online- and with no extra cuts, thank god! (Though we have added fab new artwork by one Johnny Spampinato!)

Rarely has a title provided a better description of something, as this is somewhat in the spirit of the Replacements cassette release from around then, "The Shit Hits the Fans", except in this instance, we're for the most part more concerned with disemboweling our own material rather than anyone else's. I've been wanting to get this back in circulation for a long time, as it's full of spirit and sheer stupidity; and there's no point in playing this any way other than loud, nor in listening to it without first ingesting something potentially harmful. (I could talk about this a lot longer, and perhaps will someday, but right now, I just want to get rid of it.) I find it by turns horrifying and hilarious; with recording and production on the same precipitous level as the performances...

Longtime Casualty Steve Swain raves, "I just listened while laying in bed w the wife. It made me feel gross and hungover. Just like the real thing. Thanks for wrecking my Monday mornings."

From the original liner notes:
THANKS TO EVERYONE AT 'DA 'COMA, ESPECIALLY Todd, Hugh, Danny, Andrew, Steve, Chris, Al, and all 'Coma workers past and present; and of course to all fans and friends, for instance Trey, Trey, and Baye, not to mention Jim n Kathy, Kate, Lee, Steve, Jack, Owen, Ep n' Al, Mark, Christy, Stu, the Shefflers, the Chatham contingent, Trippsters (esp. Shorty) and Johnny Apocalypso and all the other bands who opened for peanuts or less and vice versa.

I hate this band, and want to kill them. They are lazy and stinky. I can't honestly tell you why we would put something like this out, but I think it has something to do with getting rid of it. Most of these songs could sound much better, even with these same musicians playing them, and some of them will someday too, when we get around to it. Unfortunately, some of the boys feel they should have a life outside the band; go figure.

Those of you who have seen us in person may notice an unfamiliar song or two. The reason for that is, some songs were only meant to be played once or twice, tops. So if you come to one of our gigs and feel the urge to request “Land of the Lost Pinecones”, fir instance, suppress it. On the other hand, if it's “Go Bruins” you're a hankerin' for, we'd be only too glad to help out! Anyway, there's a hell of a lot of silly stuff on here, as well as some really wretched singing and playing; you're welcome!
By the way, we truly love playing for you all- it's an honor to try your patience!

Recorded by Chris Blood at the Wellfleet Beachcomber, mostly summer, 1992, except
WERS; ** the Tam; and *** the Improper Bostonian.